It was the only time I ever called a radio station. At least so far. Who knows, maybe tomorrow another desperate situation will arise. That time, I was a young mother, and the talk show topic was “How to Keep Your Preschoolers Busy and Out of Trouble.” I called. And pleaded…

“What do you do with a three-year-old, a two-year-old, and two three-week-old twins?”

The radio host’s response? “Uhh, could you say that again?”

It had been a rough day. The first day I’d been alone with four of my offspring. My husband was back at work, relatives and friends had all gone home, and I was on my own—way out-numbered kids to arms.

So far, in just a few hours, my older two preschoolers had

As my eyes met imminent disaster, all I could do was gasp a hoarse “No!” and rush gently (yes, an oxymoron) to reach the foursome—hoping that my fear didn’t cause my tiny girls to drop my tinier babies.

And WHY did my older two decide to carry their infant siblings by their heads? “They were crying, so we decided they needed to go outside.”

It had been a rough day!

While I thankfully never had another day with quite that series of unfortunate events, it would not be the last of my rough mommy days.

One started with a fun playdate with friends—and ended in the Emergency Room after my 15-month-old toppled down said-friends’ fifteen-step stairs. All the way down, from top to bottom.

I leapt over a couch to catch her just before she hit the landing. But not long after, she started throwing up from a concussion. Several hours, tests, and IVs later in the hospital, she started to perk up.

A nurse walked in. “Ah, our little patient looks so much better—And so does her mommy!”

There were the days when I messed up:

All “Mother of the Year” moments.

Face it. Mothering can be hard.

But there are also those wonderfully sweet moments.

No, mothering is not for the weak. But it’s not MY strength I have to depend on.

The One who formed these very children in the womb. Who knew their innermost parts even before the creation of the world. Who loved them enough to die for them.

Who reminds me, “Keep your eyes on Me as they keep their eyes on you.”

What does that look like when my arms are just too tired to hold the days piling up?

Because tomorrow, when those desperate situations arise –like you feel like someone’s carrying you by YOUR head—calling a talk show may give some great advice.

His steadfastness, His patience.
According to His glorious might (Col. 1:11)…
through His Spirit in the inner man (Ephesians 3:16)…
because He prays for you (Luke 12:31).

So when you fail—or when they do—turn back to Him. And listen for His still small voice that whispers softly to your tired heart:

“Turn them to look at Me. Because, while you aren’t perfect, I AM.”

Thank you to Walmart for the featured image, a poster that hangs on my bathroom wall. 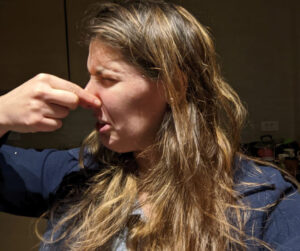 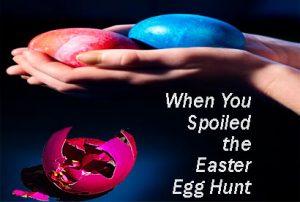 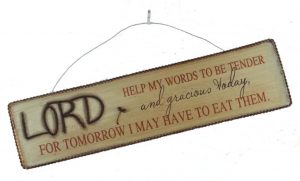 12 thoughts on “A Mother’s Strength”